On Saturday I visit a casting agency in Times Square. The offices are on Broadway, right above the Bubba Gump Shrimp Co.

I am answering an ad on Craigslist for paid extras.

The agency is called Actor’s Rep. It’s one of these charm schools that charges 10% commission only after you get work.

It sounds straightforward and unfortunately legit.

I’m in for the interview. I sign my name and telephone number into the register and sit to watch a video about the agency. 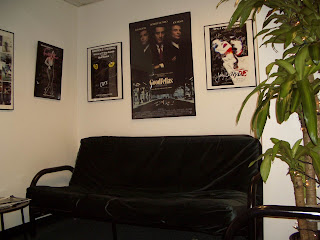 The boss appears on screen, then a few folks gush about the gigs they land. The whole production has the whiff of an infomercial. (They provide bodies for that too.)

The assistant, Deanna, cuts the show short and invites me into her office overlooking Times Square.

I talk more than she does. This is always the case.

She tells me I will be good for Law & Order. I tell her my brother once has a speaking role on that very show. She tells me she is from Kansas. I resist the urge to quote a line from The Wizard of Oz. I am done making amusements so I proceed to read the monologue in front of me.

Hadda take a break, my back, it’s startin’ to go. You too, huh? Yeah, it’s somethin’ all right. Really is. Hard to believe, huh? I mean who’d ever imagine. Couple a weeks ago, everything…so normal, right? Unbelievable! Couple a Sundays ago we had a barbeque. Kids playing Frisbee, dogs barkin’, franks on the fire. Some friends came over, couple of beers, nice. Just a couple of Sundays ago. Now………who knows?

I read the script with character, pausing for affect in all the right places I guess, because she tells me I make the cut. She is the filter for Richard, the owner. I am given his business card and told to call back at 11 a.m. the next day.

I am going to be famous.

I call back Monday morning and get Richard on the phone. He is waiting for my call. He tells me he’s going to send me on auditions. But, first I need headshots. He gives me a number of a photo agency and his direct line.

I ask another question and realize the line dies two sentences ago.

I call the photographer, get quoted $270 for a round of headshots, and call Richard back.

He says he’ll take off $50 from my first job for the photos.

I say let’s make a deal Richard. I’m in a bad place right now and you’re my ticket out. I’ll cash in my 401k and give you a cut of the pre-tax proceeds for your retainer.

I’ll sell my cd collection on ebay and use that to get acting and voice lessons.

That’s how serious I am Richard. But you gotta be with me here. We gotta make this happen together. We’re going all the way baby. You in?

He doesn’t hear any of this because he hangs up two minutes ago.

The man perfects the art of the swift and silent hang up.

Too bad, I coulda been a star.

The place is like show business; there’s no business, for me.

Anonymous said…
I live in LA and just went out on an audition--the same one you described that was on Craigslist, only it's on Hollywood Blvd in LA, right? So minus the video, I did the same thing...even the same monologue. I'm told to call back the next day at 8:05 AM. I now think I know what they're gonna tell me. Really had my hopes up. Thanks for the heads up!
4:18 AM

LTBX said…
do you know who wrote that monologue?
6:56 PM

LTBX said…
do you know who wrote that monologue
6:57 PM

V said…
No idea. Tried googling it again, and came up empty. Probably just some in-house invention.
10:57 AM