December 12, 2007
My mother is a knitter. The closest I’ve come is hand spooling the yarn for my scarf at the yarn shop. It burns more calories than one would think.

Lunch time at the Starbucks on 57th Street. I sit next to two women who are surveying their yarn purchases from the yarn show at the Holiday Inn two blocks away.

We start talking. Soon enough two other women walk in, obviously from out of town, encumbered with garbage bags.

I’m thinking, couldn’t they afford suitcases? Or, if you’re going that route at least use Hefty garbage bags.

The two women I’m talking to recognize the cheap garbage bags and call out to the women whose sacks I learn are holding their yarn purchases. Now there are five of us, occupying three tables talking about knitting.

As far as knitting goes, I have two topics I can riff from:

My mother knits me a handsome cobalt blue scarf with the yarn I spooled. She knits one for my father too and presents it to him last Christmas in a nice box, where it remains. This ensures he will never lose it.

I then ask if the Stitch ‘n Bitch woman makes an appearance. Sadly she does not. Debbie Stoller, author of the Stich ‘n Bitch empire, is a stitching legend. She’s like the Jacques Cousteau of knitting. (Go ahead, try naming another deep sea explorer.)

And the title is fun to announce; it’s the only way a some women can openly say bitch without having to work at a kennel. 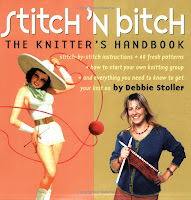 The more matronly of the four makes the round of the Northeast yarn circuit. She talks of a legendary show in New Hampshire where the women drink all the beer at the hotel and just tear up the place. Somehow in talking to these women, and then receding into the background, their chatter made the most matronly of pursuits seem empowering.

If you are woman enough, and strong enough, knitting won’t knock you.

After encountering the knitting crew, I am tempted to begin my Christmas shopping at the yarn show. Though I decide it won't be the best thing to get my Mom. It’s almost like buying a present for yourself, and then asking the person to make it for you.

I don’t often reference TV shows, but the Simpsons, Sesame Street and Seinfeld have earned honorary inclusion in the literary canon.

One Christmas, Homer buys Marge a bowling ball, monogrammed with his initials.

I’m good with gifts and I don’t want to be Homer, but I still want to attend.

Unfortunately, I never make it to the Yarn show. I even ride the subway into town on Saturday with good intentions, my mom’s scarf draped around my neck to give me an air of legitimacy.

And maybe that’s the draw of knitting for others. I own the scarf. It sits in storage in my closet during the warm months, and it wraps around my neck when it’s cold, but it is still my mother’s scarf.

Maybe I will buy her some yarn after all.
knitting scarves yarn