The Denizens of Daytime (Part 1)

December 26, 2007
Who exactly is out in the middle of the day? Students? The jobless? The aimless? Service staff? Hospital staff? Midnight tollbooth workers?

I sit at the bar. At this hour I have to summon someone to play bartender.

Good. I need to be alone, away from inquisitive eyes branding my actions bizarre.

Which they are, but my motives are legitimate. Sometimes though, the explanation is more of an endeavor than the operation.

They should be. Fisherman’s Friend are the strongest on the shelf.

My target audience is smokers. I feel a campaign cast with booze will be a good way to reach them.

The line for the first ad: “Other cough drops make good chasers.”

On the package, this variety of Ricola is pictured green, like a lime, but unwrapped it appears yellow, forcing me to paint a prop cough drop green with a sharpie.

I see a tall blonde woman standing in the coffee line and I think she is a nanny. In Brooklyn, they seem to be either German or Jamaican. (She looks German.)

I explain what I’m doing and why I’m ordering a glass of whiskey when it’s barely noon.

She buys my story like painting cough drops is commonplace.

Why wouldn’t she? It’s snowing outside, I have the day off and it’s truly for education purposes.

So what’s her story? Have I met an elusive tollbooth worker?

Cody is a Berklee School of Music grad who plays violin since the age of three and is still playing, now for a living.

I take up the violin twice in my life.

First, in elementary school, our lessons begin without an instrument. I remember practicing at home with an umbrella. It is not until 10 years later that I first hold the instrument.

As a visiting student at Appalachian State I learn to play the fiddle, and though I remain a big fan of old time mountain music, I can only play one tune.

Every musician has a cheesy music joke in their repertoire. My ratio of songs to jokes is 1 to 1.

What’s the difference between a violin and a fiddle?

Nobody cares if you spill beer on a fiddle.

I get a laugh.

I speak with her for an hour before we part ways. I have important work to do.

So does she. Cody is a working musician who makes a living pulling a horsehair bow. It is a life that consists of giving lessons, playing bar mitzvahs, and the occasional big time gig with the likes of Kanye West.

It is a life that travels the world. She recently toured with a bluegrass band in China and has a pleasure trip to Europe planned.

And besides getting paid doing what you love, you are also your own boss, fulfilling no matter what you’re line of work.

She laments the success of some of her classmates, one in particular who is the leader of an indie band called St. Vincent.

Cody may not yet be a diva worthy of every demand; but she’s not doing data entry as a temp somewhere.

I always say that when I retire, I’ll get back into playing music. It’s hard to get good though, especially on the fiddle. When played right, the bow pulls some beautiful tones, but in the hands of the unpracticed, it is second only to the bagpipes in the torturous cacophony the instrument is capable of creating.

She hands me her card. I take a wild guess figuring she will have many pictures on her website.

She's pretty; the music is beautiful. 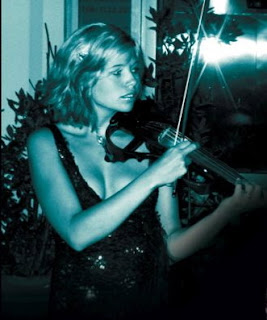 ZenDenizen said…
I found you on the NY Bloggers meetup and the title of this post caught my eye for obvious reasons. Oddly enough I was listening to Kanye West when I read the line about Kanye. Elusive toll booth workers, that was great...
4:26 PM