The family of six lived in a one-bedroom flat in a building filled with families new to the new world. I visited the Tenement Museum a few years ago and found the tour guide’s stories redundant. Chocha told them to me first.

She turned off the lights for the Orthodox Jewish families on the Sabbath; on sweaty summer nights they slept on the fire escape, for the breezes and the extra space it afforded.

In those days in downtown Manhattan, you made it if you made it out. When Chocha was 11 her family moved to Jamaica, Queens, where my mother was born and raised.

My grandmother and grandfather’s family lived in the upstairs half of a two family home, and my aunt and uncle lived downstairs. My Aunt Chocha and Uncle Eddie are siblings; I didn’t realize they weren’t married until my teens.

They lived in Jamaica for over 50 years. For 40 of those years, Chocha commuted to her job at Standard and Poors in lower Manhattan.

Jamaica was once a predominately Polish neighborhood. The only vestige of the old neighborhood as they knew it is the church, St. Joseph's, where Polish mass is still said every Sunday.

Crime in New York peaked in the 1980’s; Jamaica was no exception. When a bullet fired into the house lodged in the dining room wall, my grandfather played CSI with a yard stick, measuring the trajectory of the gun shot. Their trajectory was south Queens.

The family moved to a second two-family house in South Ozone Park near Kennedy Airport.

There was noise, but no crime. For all the glamour given to the mafia, there is one accepted truth: mob presence deters street crime, and brings fireworks. I remember watching John Gotti’s annual Fourth of July display through the upstairs window with my grandmother.

A few years after my family moved to South Ozone Park, a Puerto Rican family with Sandra Cepeda as the matriarch, moved next door.

As the first Latin family on the street they were met with trepidation by an overwhelmingly white neighborhood.

Chocha though, ushered them in. She was a neighborhood mentor who made them feel at home, at home. I never knew how much Chocha meant to Sandra and her family, but I knew how much she meant to my own.

I rarely saw Sandra, but I heard about her every time I saw my aunt. In later years, as a child of the Westchester suburbs, I moved to Brooklyn and would take the A train to visit Chocha, on a ride that took our family full circle back to the City.

Chocha died last week. She was 93. Four generations of my family paid our respects.

Sandra came with three generations of her family that had extended into the suburbs like my own. They did double duty at the wake, appearing for both the day and evening viewings; her family almost outnumbering ours at times.

Chocha, means aunt in Polish. Chocha didn’t have any children of her own, but she was an aunt to everyone.

She will be missed. God Bless. 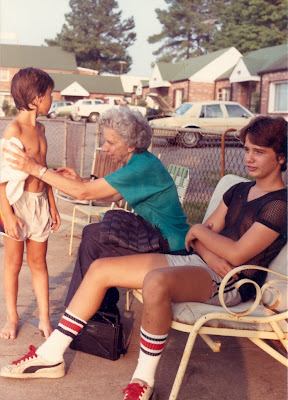 Nora Leah Sherman said…
This is a beautiful remembrance of your aunt, and of a city.
1:16 PM

Anonymous said…
I am so happy you wrote this..I will be saving it for Lauren. Cha Cha was an original. A "true" New Yorker.
If only more people could see what beauty that city produced.
9:06 AM