A Texan Walks into an Irish Bar 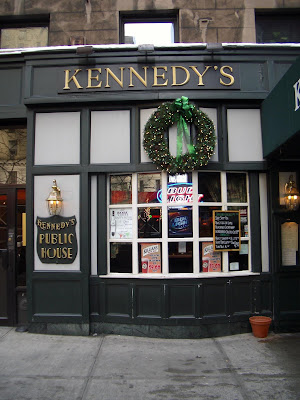 Tough Tuesday at work. How often I forget that cheer is just around the corner. I’m of legal age and am not enrolled in a court ordered 12-step program, so why not.

Kennedy’s is on 57th Street. I sit down at the bar and order a pint of Stella. Bartender has an Irish accent, so does the décor; red tablecloths and mahogany.

The crowd is older. In my first 15 minutes there I see a young guy about my age do the survey walk in and out.

I walk in with purpose.

The guy next to me is reading the Wall Street Journal. He wears navy blue Dockers with pleats, and a button down shirt of a different shade of navy. Short balding hair, he’s in the process of putting on pounds. Obviously out of town; in for business.

I’m writing in my scratch pad; I’m not getting anywhere. MSNBC is plying Wall Street. Gas is down; the market is up 300 points. The Friday before is the exact opposite.

I turn to him and ask what he thinks of the possibility of a recession given the market ups and downs.

He says he ignores it. I mention how Wal-Mart buoys the market for the day by posting solid third quarter earnings.

Fucking hates the place, he does. His name is Patrick. Works in software sales. He’s from West Texas, now lives in Dallas with his wife and two daughters.

Patrick swears like a sailor who just stubbs his toe. I have to throw in a few of my own gratuitous curses to keep pace.

He is in his late thirties and still has that post-collegiate vibe about him. Definitely a Hooter’s guy.

You don’t get to meet too many folks from Texas in New York. I meet two others.

If you want to meet a Texan, go to Texas. Patrick is plucked right out of Lone Star state.

I get him talking.

His house is 4,000 square feet, though he asserts that he doesn't need a house that big.

It is the insistence of his wife, he says. I haven’t even fucked in all of the rooms yet.

He hasn’t taken a shit in all of the bathrooms either.

In the middle of our conversation he gets a phone call from his boss.

He answers the phone: “What are you wearing?”

I am last in Texas in 2000. I drove through the panhandle. I don’t remember much except it is a dry county.

Much of Texas, Patrick said, is dry, even some suburban communities of Dallas. He once goes to college near the Oklahoma border where alcohol is sold 24/7. I asked if this had anything to do with the large Native American population in Oklahoma.

I am never in Dallas. He described the woman as having big hair and big tits.

I asked him if they were real.

If you have to ask that question, you don’t belong in Dallas, he tells me.

Though if I do visit, I’m supposed to see a Dallas Stars hockey game. Apparently it’s where the women go to be seen.

I keep thinking to myself, this is the most unmarried married man I've ever met.

We go back to talking about Wal-Mart. I am working on creating a spec advertising campaign for them and have read four books about the subject in the last few weeks.

Wal-Mart is relentless about saving money. Patrick is a software salesman. No software ever sells for retail, especially not to Wal-Mart.

You’re paying for intellectual property; the discs are only plastic.

Wal-Mart pays 98% off retail: $1 billion worth of software for $5 million.

Wal-Mart once tries to reposition itself to appeal to more well-healed customers. It doesn't work.

There’s a Wal-Mart next door to a Target in Dallas. They share the same parking lot. Target is for the Milfs. Wal-Mart is for white trash rednecks.

He can tell what store they are going to just by the car they drive.

Funny though, he won't tell me what company he works for. Said he doesn’t divulge company details at the bar. I’m sure he learns from past experience.

And now I remember why I avoid after work drinks. I hate having headaches before dinner.
Kennedy's New York